You are here: Home / News & Events / Cynthia Thomas builds The Montessori Group into a thriving enterprise 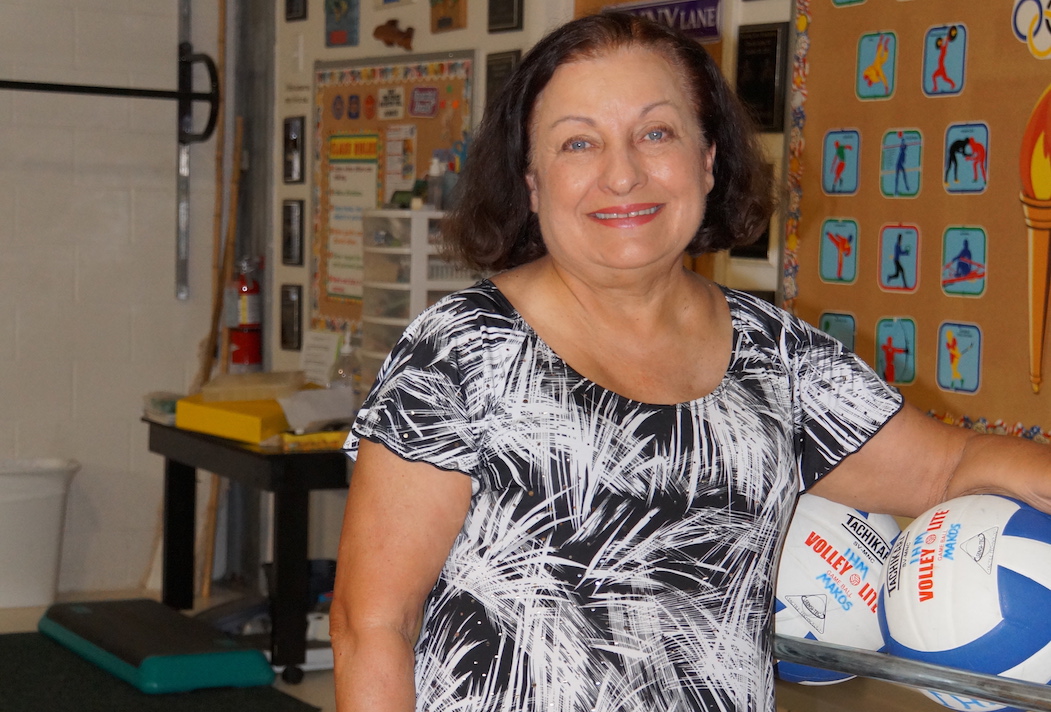 Educator and businesswoman Cynthia Thomas is head of schools for The Montessori Group, which has campuses in Indian Harbour Beach, Suntree, and Rockledge. She also owns the preschool Country Day for Children in West Melbourne. Thomas started one of the first charter schools in the region, Educational Horizons Charter School. She once owned 14 Montessori schools in Florida and Georgia. Thomas earned her master’s degree in education, with a Montessori specialization, from Chaminade University in Hawaii. She is at The Montessori Group’s flagship campus in Indian Harbour Beach.
Photo courtesy of Brevard Business News

Long ago while living in Hawaii, Albert and Cynthia Thomas decided to enroll their two young children in a Montessori school. That decision not only brought them closer to the philosophy and learning concepts of Montessori education, but it also put them on the path to building a highly successful business in Florida and Georgia.

“We are very proud of what we have built over the last 33 years,” said businesswoman Cynthia Thomas, head of schools for The Montessori Group, which has its flagship campus on Banana River Drive.

“Our former students are out in the world doing great things. We have terrific teachers and staff at all of our schools. They are dedicated to the Montessori Method. The average staff tenure is close to 20 years. We are very fortunate in that regard, and it’s how we’ve been able to build a really strong group of schools.”

Her schools’ programs emphasize science, mathematics, language, and research. The classrooms have unique Montessori learning materials, meticulously arranged. The materials are displayed on accessible shelves, fostering independence as students go about their work. Montessori education is a hands–on approach to learning.

The materials provide “passages to abstraction,” and introduce concepts that become increasingly complex. Each material teaches a single skill or a single concept, one at a time. “Three–dimensional grammar” symbols, for instance, help elementary students analyze sentence structure and style.

In early childhood, Montessori students learn through sensory–motor activities, working with materials that develop their cognitive powers through direct experiences, such as seeing, hearing, and touching, said Cynthia Thomas.

The classes include multi–age groups of children that foster peer learning, and uninterrupted blocks of work time for the children. The teacher, the child, and the environment create a “learning triangle.”

Computers and laboratories are a central part of the learning experiences, too, as are field trips. “One of our most popular field trips is to St. Augustine. Our third– and fourth–grade classes go there every other year.”

Her students have excelled competing in the local Science Fair. “We do very well in the Science Fair. We have a very strong science program. The projects are a year–long undertaking,” she said.

The students start their projects early and have “log checks” along the way and various deadlines to meet. Once they have their projects completed, they go around and make presentations to the different classes, and they do that multiple times.

“They eventually present their projects to a ‘judge’ at our school. We tell the kids you have to be able to sell your project to a judge. When we choose the projects that will go on to compete in the District, we refine the work and even teach the students how to walk across the stage and accept an award. The Science Fair competition gives our students some wonderful life skills.”

On this day, one youngster in the classroom at the Indian Harbour Beach Montessori Especially for Children was busy tracking the tropical storm Fiona that was moving across the central Atlantic Ocean. He had his official National Oceanic and Atmospheric Administration tracking map. His lines were drawn on the chart and his projections made. He stood up in front of his classmates and gave a detailed analysis of his forecast, with the confidence of a certified meteorologist.

“The Montessori Method teaches children at the earliest age how to learn, how to research, how to think on their feet, how to speak in front of their classmates and in front of people, and much more,” said Cynthia Thomas. “Montessori education offers children opportunities to develop their potential step–by–step, to be engaged, competent, and responsible. Our own children have seen the fruits of this type of education.”

The Thomas’ two children have gone on to successes in life. Dr. Leslie Thomas is a board–certified veterinary surgeon in Tampa. It was her life–long ambition, her mother said. Jeff Thomas is a local entrepreneur who owns Comfort Air Inc., a well–known business in Brevard County.

“When we were in Hawaii and our children were in a Montessori school they had an incredible educational experience. I said, ‘Wow! If every child had this type of experience there would be no learning failures.’ It teaches through all the modalities. Montessori really brings out the giftedness in every child. It’s amazing what happens.”

Later, with her husband at her side, who retired from the military and once was a commander at the Eastern Test Range at Patrick Air Force base, the two devoted their energies to Montessori education, creating a network of schools in the area. Albert Thomas is the chief financial officer for The Montessori Group, which they operate.

The Montessori Group provides “child–centered” education for students ages 1 to 12. Their group includes the Indian Harbour Beach Montessori Especially for Children, with an enrollment of about 130 students, from 18 months through sixth grade; Suntree Montessori, where 30 youngsters are in the 3– to 6–year–old program; and Rockledge Montessori, a kindergarten program for ages 1 through 6, which has some 80 students.

In 1983, they started their enterprise in one small facility they built in Indian Harbour Beach, near Charlie & Jake’s Barbecue on East Eau Gallie Boulevard. The program was so popular they had to offer “double sessions.”

Two years later, to accommodate growth, their business built a facility on Banana River Drive in Indian Harbour Beach, which is now the main campus for The Montessori Group. “We opened in 1986 at that location with one building and we’ve had four expansions since,” she said.

The pretty, wooded campus features two playgrounds and a basketball gymnasium, which includes a theater where all students participate. “We have a tremendous sports program and have won a lot of honors. I think that our sports teams excel because the students are taught in the classrooms how to work in teams. They learn the importance of teamwork.”

Cynthia Thomas was one of the first education entrepreneurs in this area to start a charter school. In the late 1990s, she founded the public Educational Horizons Charter School in West Melbourne, and is still involved with that venture. About 120 students are enrolled there.

The school serves kindergarten through sixth–graders, utilizing a Montessori elementary curriculum. Educational Horizons Charter School was recently ranked the 37th best school of its kind in the state. “We are proud of that ranking.”

Her schools hold a range of affiliations and accreditations. For example, Indian Harbour Beach Montessori is American Montessori Society–affiliated, and accredited by the National Independent Private Schools Association, and Southern Association of Colleges and Schools.

In the last 15 years, interest in Montessori education has surged across America, including in the local market. This interest is evident in the rise of research on these types of programs, increased mainstream press, and the opening of new Montessori schools.

“We have seen tremendous growth at our schools,” said Cynthia Thomas. “The visibility of the Montessori name has risen in communities around the nation as more parents come to embrace the program and enroll their children in these types of schools. Montessori is a time–tested, proven method of education.”

She added, “The concept was started more than 100 years ago by Dr. Maria Montessori. She was the first female physician in Italy. Dr. Montessori was a great observer of children. Part of the Montessori Method is to serve the child and watch how they learn. It’s a child–centered approach to learning.”

Since 2000, more than 300 new Montessori programs have opened, not only in the private sector but also in the public sector. Scientific research confirms that Montessori children have an advantage not only academically, but also in social and emotional development.

Cynthia Thomas said her students score in the “top percentile on testing.” They use the “Iowa Test of Basic Skills,” which is standardized testing.

In the early 1990s charter schools were introduced in America. Then came the expansion of choice options in many urban school districts. Now a growing number of parents and educators are seeking alternatives to conventional public–school education, and many are turning to the Montessori schools.

Dr. Montessori observed that children experience “sensitive periods,” or “windows of opportunity,” as they grow, said Cynthia Thomas. As their students develop, Montessori teachers match appropriate lessons and materials to these “sensitive periods” when learning is most naturally occurring.

“One of the hallmarks of Montessori education is multi–age groupings in the classrooms,” said Cynthia Thomas.

“There are many advantages. For instance, the younger children learn from the older children in the classroom. When a 3–year–old hears a 4–year–old or a 5–year–old working on sounds to reading, he or she is listening. It’s common to see the students of different ages working together. The older students enjoy mentoring the younger students.”

In the elementary years, the child continues to organize his thinking through work with the Montessori learning materials and interdisciplinary curriculum as he or she passes from the concrete to the abstract. The student begins applying their knowledge to real–world experiences.

“We feel that our curriculum does everything for us,” said Cynthia Thomas. “Montessori is one of the most trusted education plans. I only see Montessori education growing in scope in the future.”